What is a QCL?

Since the first operational QCL emitted light in 1994 tremendous effort has been put into making them more robust, versatile, and manufacturable. Quantum cascade lasers are used in industrial exhaust sensing, safe-distance explosives detectors, light sources for infrared imaging systems, medical diagnostic breath analyzers, and a variety of other sensing and spectroscopic applications(2). The number of markets for QCLs is growing at an ever-increasing rate as scientists and manufacturers gain more experience with them.

QCLs operate in a fundamentally different way than diode lasers: 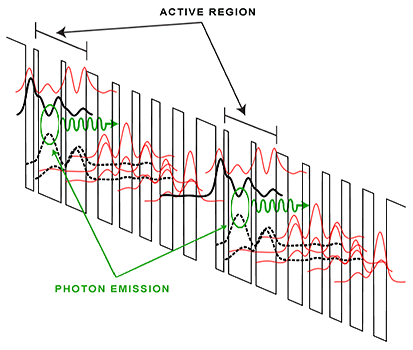 The output wavelength is determined by the structure of the layers rather than the lasing material, and that means device fabricators can tailor the wavelength in a way that can’t be achieved with diode lasers. While diode laser output wavelength is limited to ~2.5 µm, QCLs operate at much longer wavelengths: mid-wave infrared production devices up to 11 µm are available, and some 25 µm emitters have been made on an experimental basis. This transmission range is useful because of the large number of absorption lines exhibited by common target gases that fall within this band.

Terahertz QCLs are now being commercialized – some emitting in the range of 100 µm to 150 µm. More complex gas molecules absorb at these longer wavelengths, and greater measurement accuracy is possible with QCL-based systems than with current technologies. QCLs allow for remote sensing of these complex molecules, whereas most traditional methods require a sample of the subject material. Some technical challenges remain before these systems are commercially viable on a large scale, but the technology is advancing rapidly.

Where are QCLs used?

Perhaps the most important application for QCLs is in gas sensing and measurement. Systems based on widely-tunable QCLs can be used to measure multiple gas species, and narrowly targeted systems can detect and measure gas concentrations in the parts-per-trillion range.

Distributed feedback QCLs (DFB QCL) are capable of wavelength tuning up to a few tens of cm-1. External cavity QCLs (EC-QCL) expand the tuning range to ~1000 cm-1, and are used for sensing and measuring multiple gas species(3),(4). These types of QCLs are used for both local and remote sensing of numerous gas species, including CO, CO2, NH3, CH4, NOX, and SO2.

Because they require relatively low power and are so small, QCL-based systems replace larger and slower FTIR and mass spectroscopy systems for both lab and field work. Ruggedized applications include continuous exhaust monitoring on an industrial basis, such as in-the-stack measurements of pollutants, or well-head detection of byproduct gases at petroleum drilling platforms.

Specific examples of applications where QCLs excel include:

QCL-based systems are also finding application in the growing field of medical diagnostics(5). Trace gases present on a patient’s breath can indicate diabetes, asthma and other respiratory issues, kidney and liver dysfunction, and other indicators are being discovered regularly. Such an application requires extremely fast sampling times, relatively small size, and accurate results in order to avoid misdiagnosis.

At present QCLs are still somewhat specialized devices. Manufacturing is difficult to optimize, and small batch sizes result in high unit cost. As the value of these devices is more widely realized and more applications are created, QCLs will become more readily available and affordable.

Implementing QCLs requires system designers to pay particular attention to the driver and temperature control electronics. Current noise from the QCL driver causes the laser linewidth to broaden, which reduces the overall system sensitivity and precision, and temperature change causes the wavelength to drift. In order to fully realize the precision made possible by QCLs it is important that they are powered by ultra-low noise drivers and highly stable temperature controllers. Visit our QCL Driver Basics page for more information about these important components of any QCL-based system.