What is a Test Load?

And why do I need to use one? How and when should I use one, and how do I know it’s working?

These are questions our technical support staff are asked regularly, along with how to set up a test load and which load is best for each Wavelength product series. The discussion below will cover that information, as well as what equipment you need, when to use Constant Current or Constant Power modes, and how to prepare your equipment for the actual load. We will address using test loads with only temperature controllers and laser diode drivers.

A test load is a tool for testing a device or system and measuring a response without using the application load and, ideally, the test load should closely mimic the eventual load. Using a test load is a good way to get familiar with a controller, test how it works, and make sure it operates as expected before the final set up. For example, laser diodes can be expensive and are usually not readily available, so destroying one during set up can be both costly and time consuming. To avoid this hazard, the system can be set up with a test load and tried before attaching the laser diode. A test load can also help show, through monitoring, what happens when limits are exceeded. Additionally, if you are having a problem while using a system, a test load can help troubleshoot any problems.

NOTE: While this Application Note will address questions particular to using a test load, it is not meant to replace the product datasheets, which contain all of the equipment, instructions, calculations, and troubleshooting information needed to successfully use the products.

Why Use a Test Load for Laser Diode Set Up?

Using a test load verifies that the rest of the equipment is set up correctly and in working order prior to attaching the laser diode. It also allows you to become familiar with trimpot rotation and sensitivity, to correctly set up wiring and monitoring, and to troubleshoot any problems that may arise.

The test load processes that follow verify the current output in Constant Current mode and the limits are set up and can be monitored. When setting limits, you are able to see when the limits are reached and can adjust the set up of the controller accordingly. In Constant Power mode, the test load allows you to set up and monitor the simulated photodiode current.

The following equipment is necessary when setting up a test load:

Using Constant Current when setting up the test load allows you to set the Current Limits and Current Setpoint. Wavelength trimpots are 12-turn trimpots and are turned counter clockwise (CCW) for off and clockwise (CW) for on, the exception being the LDTC 2/2 E & O, where they are reversed. Consult the product documentation to verify the direction before proceeding.

NOTE: The 12-turn trimpots continue to turn after the 12th turn has been reached. Any additional turns do not vary the resistance. 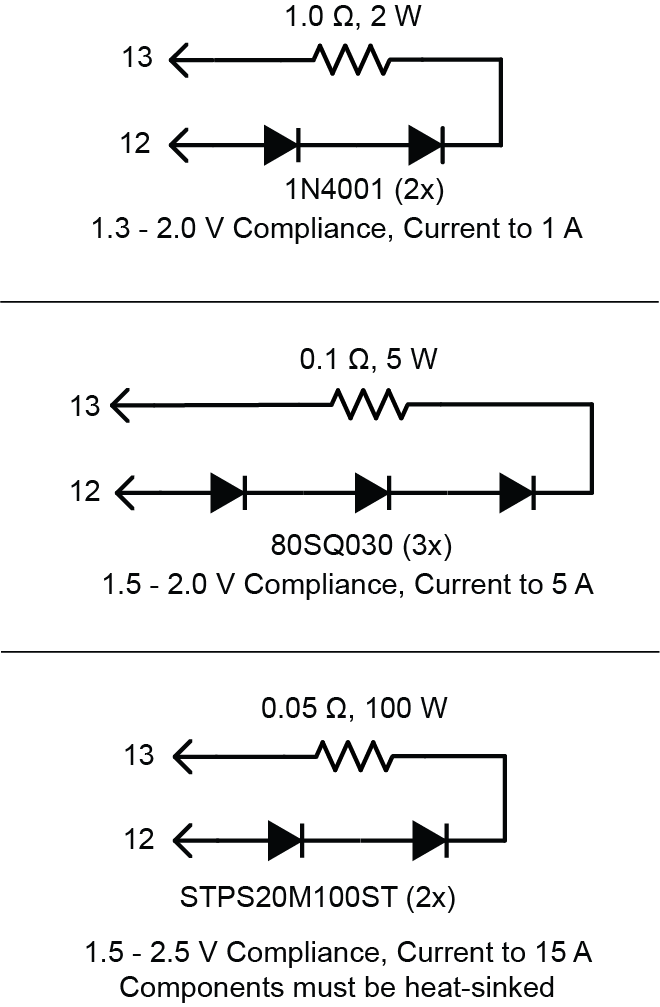 NOTE: If testing a load in Constant Power mode, do NOT follow this step.

The values in Table 1 are based on the following:

NOTE: If the current limit is set below half of the maximum capacity of the laser diode driver, the PMON voltage and feedback will be lower.

To decrease ILD, but keep PMON at approximately 1 V, reduce RE.

To decrease PMON for a given laser diode current, increase RE. The new PMON will be proportional to the change in RE. 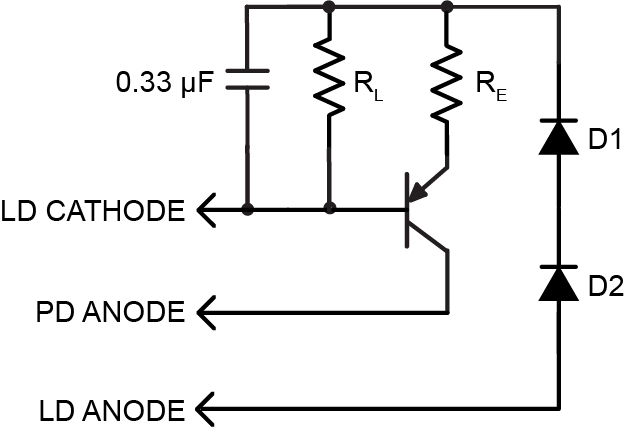 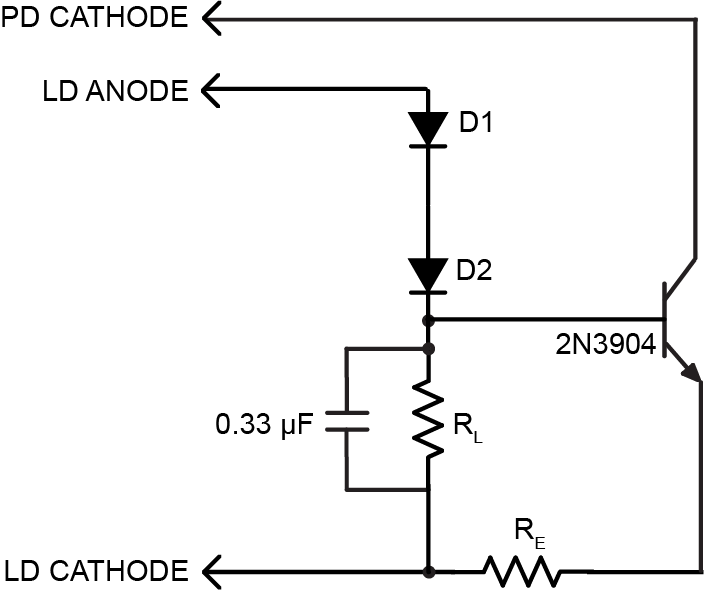 NOTE: Settings for the WLD laser diode driver family are not given. This is because the photodiode gain resistor is external to the WLD. Contact the factory for assistance in setting up a constant power test load for the WLD.

About Temperature Controllers and Test Loads

Setting up a test load and testing with a temperature controller allows you to test the direction of current flow through the load. It shows the polarity of the controller and whether the sensor feedback is working properly.

The following equipment is necessary when setting up a test load: 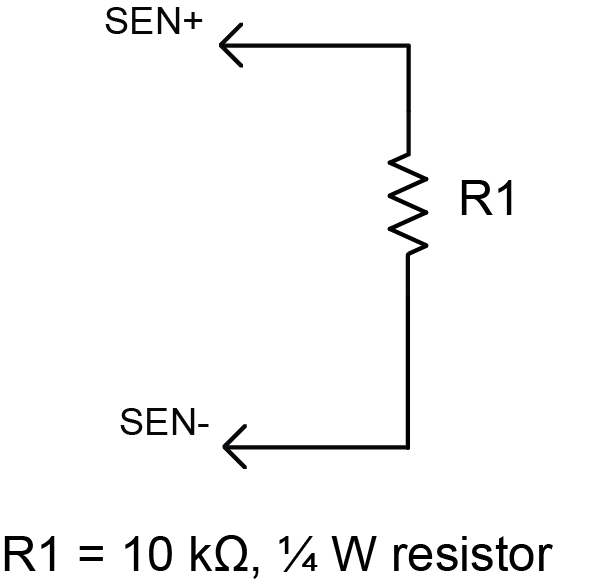 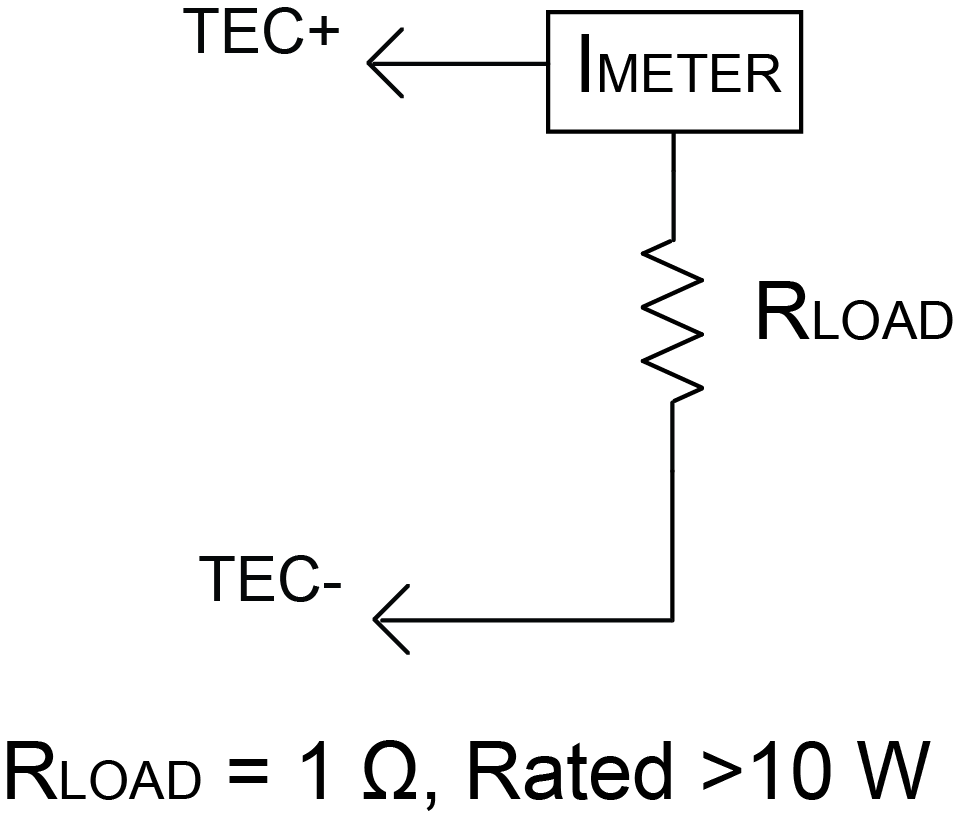 Once you are comfortable with using the equipment, then it can be powered down and the test load removed. Make sure everything is reset, such as returning the Setpoint trimpot and the Current Limit trimpot to OFF (usually 12 turns CCW) before connecting the application load. Once the actual load is connected, start the set up protocol from the beginning. Be sure to use the appropriate datasheet when setting up the application load.

Using a test load to become familiar with your Wavelength product will help protect your application when setting up the final load. As always, our technical sales engineers are available to help with any questions you may have.