What is a Photodiode?

A photodiode is a semiconductor device with a P-N junction that converts photons (or light) into electrical current. The P layer has an abundance of holes (positive), and the N layer has an abundance of electrons (negative). Photodiodes can be manufactured from a variety of materials including, but not limited to, Silicon, Germanium, and Indium Gallium Arsenide. Each material uses different properties for cost benefits, increased sensitivity, wavelength range, low noise levels, or even response speed.

Figure 1 shows a cross section of a typical photodiode. A Depletion Region is formed from diffusion of electrons from the N layer to the P layer and the diffusion of holes from the P layer to the N layer. This creates a region between the two layers where no free carriers exist. This develops a built-in voltage to create an electric field across the depletion region. This allows for current to flow only in one direction (Anode to Cathode). The photodiode can be forward biased, but current generated will flow in the opposite direction. This is why most photodiodes are reversed biased or not biased at all. Some photodiodes cannot be forward biased without
damage.

A photon can strike an atom within the device and release an electron if the photon has enough energy. This creates an electron-hole pair (e- and h+) where a hole is simply an “empty space” for an electron. If photons are absorbed in either the P or N layers, the electron hole pairs will be recombined in the materials as heat if they are far enough away (at least one diffusion length) from the depletion region. Photons absorbed in the depletion region (or close to it) will create electron hole pairs that will move to opposite ends due to the electric field. Electrons will move toward the positive potential on the Cathode, and the holes will move toward the negative potential on the Anode. These moving charge carriers form the current (photocurrent) in the photodiode. Figure 1 shows the different layers of a photodiode (P-N Junction) as well as multiple connection points on top and bottom.

There are four major parameters used in choosing the right photodiode and whether or not to reverse bias the photodiode.

Other important parameters include material, size of the photodiode and active area, and cost. Careful consideration is needed when browsing for photodiodes for your research or application. Photodiodes made from different materials (silicon, germanium, indium gallium arsenide phosphide, or indium gallium arsenide) have varying levels of sensitivity as well as differing speeds and dark current. Silicon, for example, provides sensitivity for wavelengths between ~400 and 1000 nm. However, it has the highest sensitivity at higher wavelengths (~900 nm). Germanium, on the other hand, provides sensitivity for wavelengths between ~800 to 1600 nm (with the peak ~1400 nm). The material of the photodiode is critical when finding the right photodiode to incorporate into your laser diode system.

Current passing through the photodiode can only flow in one direction based on the P and N doped materials. If reverse biased, current will not flow through a photodiode without incident light creating photocurrent.

The capacitance of the junction is decreased, and so the speed of the photodiode increased. The increased layer also allows for a larger volume of photon to electron-hole conversion and higher Quantum Efficiency.

PIN photodiodes also have high frequency response. The major advantage of the PIN photodiode, compared to the P-N junction, is the high response speed from the increased depletion region.

Avalanche photodiodes (APD) use impact ionization (avalanche effect) to create an internal gain in the material. APDs require high reverse bias operation (near reverse breakdown voltage). Each photo-generated carrier creates more pairs and so is multiplied by avalanche breakdown. This creates internal gain within the photodiode, which in turn increases the effective responsivity (larger current
generated per photon). Figure 3 shows the cross section of the APD.

The typical spectral response range is around 300 – 1100 nm. Current noise in an APD is higher than in a PIN photodiode, but the increased signal gain is much greater making signalto-noise ratio greater in APDs. APDs generally have a higher response speed and the ability to detect or measure light in lower levels. 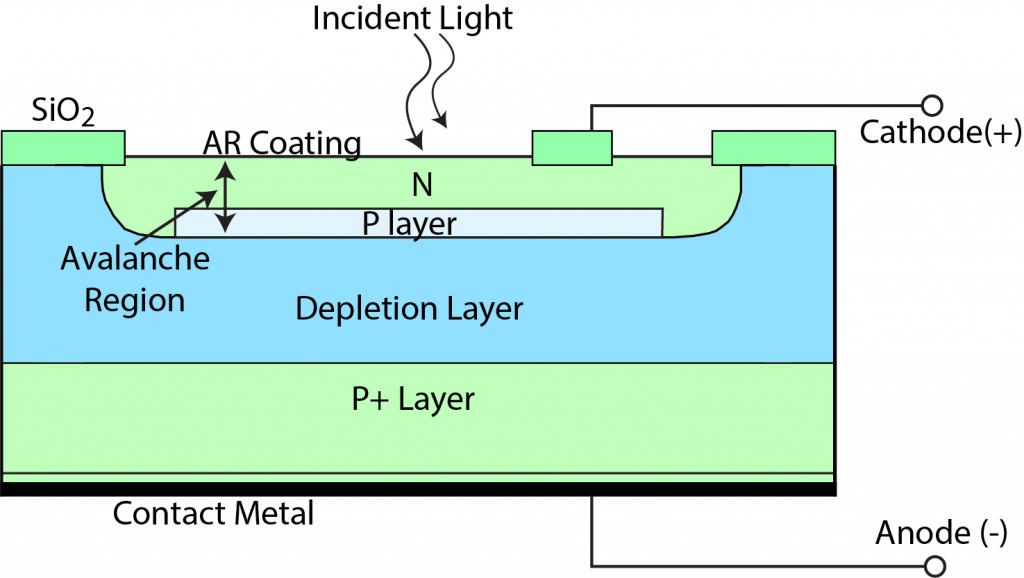 Photodiodes can be operated without any voltage bias. APDs are designed to be reversed biased, so this section will be relevant to the P-N and PIN photodiodes. Without added voltage across the junction, dark current can be extremely low (near zero). This reduces the overall noise current of the system. Thus unbiased P-N or PIN photodiodes are better suited for low light level applications compared to operation with reverse voltage bias. (The reverse biased APD will still provide a higher sensitivity than P-N or PIN photodiodes for low light applications.) Unbiased photodiodes can also work well for low frequency applications (up to 350 kHz). Unbiased mode (where V = 0) can be seen in Figure 4 in between the forward bias mode (in green) and the reverse bias mode (in blue). The plot shows very little, if any, dark current when unbiased, which can be seen by the lack of current at the intersection of the I-V curve at V=0.

When the photodiode is illuminated, the electric field in the depletion region increases. This produces the photocurrent which increases with increasing photon flux. This is most commonly seen in solar cells where the generated voltage is measured between the two terminals.

The major downfall with unbiased photodiodes is the slow response speed. Without bias to the system, the capacitance of the photodiode is at a maximum, leading to a slower speed.

Unfortunately, increasing the bias current increases the dark current as well. This noise can be a problem for very sensitive systems using P-N or PIN photodiodes. This hinders the performance in low light situations. If using APDs, the signal to noise ratio will be large regardless because of the gain of the photodiode. Because a photon is ideally absorbed in the depletion region, the P layer can be constructed to be extremely thin. This can be balanced with the reverse bias to create an optimal photodiode with a faster response time while maintaining as low as noise as possible.

Another benefit to reverse biased operation is the linear output (straight line in blue section of Figure 4) of the photodiode with respect to the illumination. This simply means that the voltage and current change linearly (directly proportional) with increasing optical power. The non-linearity of the forward bias section (in green) can also be seen. 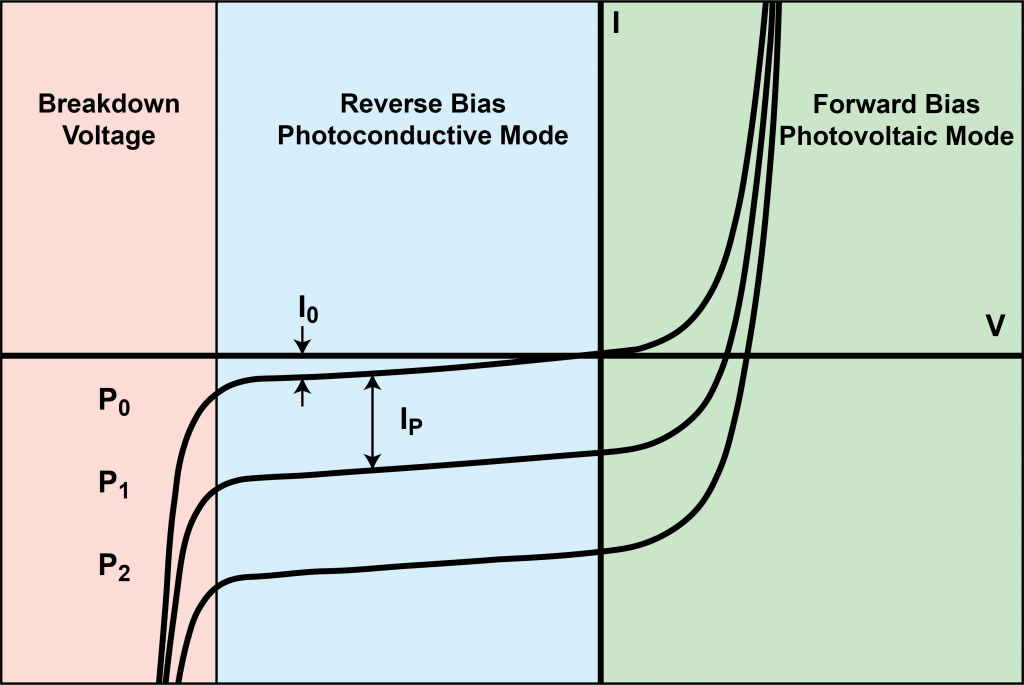 Not only can photodiodes monitor the DC or CW output of a laser by providing current back to the laser system, they can also test a laser pulse shape and record peak powers of a laser pulse.

The information in datasheets for photodiodes include the four major components discussed earlier, the type of photodiode, peak sensitivity wavelengths, and most importantly size and cost.

Photodiodes that are already incorporated into the laser diode system can be limited in options and information. Laser datasheets usually give the maximum reverse voltage and sometimes the sensitivity of the photodiode.

If the specifications of the photodiode are extremely important to your laser design, custom builds or assemblies may be required to meet your needs.

Reverse biasing the photodiode will be much more responsive than unbiased mode. If operating in photovoltaic mode, the response may need to be amplified.