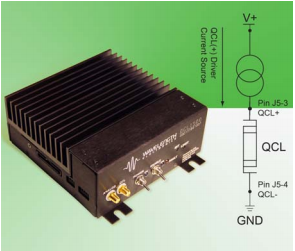 The low-noise QCL OEM driver has enabled countless applications with its patented circuitry. Now, the reverse polarity driver, a current source, is available in the OEM package. Often with epi-down configurations of the QCL the exit lead is attached to the case and it is desirable to ground it. While floating both connections would make it possible to use the standard QCL OEM, simply use the QCL OEM(+) and ground the connection. The Analog Input for remote setpoint input operates at 0 to +5V input, with bandwidth up to 1-2 MHz for the QCL500(+) and 500 kHz for the QCL2000(+).

These Low Noise QCL OEM(+) Series Drivers have the lowest current noise density of any commercially available driver. Powering your QCL with this driver will enable better performance—at lower cost and in less time—than otherwise possible. This is the right driver for QCLs that require a high precision and ultra-low noise current source. The 500 mA QCL OEM(+) driver exhibits noise performance of 0.5 μA RMS to 100 kHz, and an average current noise density of 1.5 nA / √Hz.

Two key characteristics of quantum cascade lasers make them popular for precision sensing and spectroscopy applications: 1) the wavelength can be custom-tailored to mid- and long-wavelength IR, and 2) the extremely narrow linewidth allows for faster, higher-precision, and more repeatable measurements than competing technologies.
Quantum cascade laser linewidth is key to precision sensing applications, and trace gas concentration measurement sensitivity in the parts-per-trillion can be achieved with careful system design. All aspects of the detection system must be designed and executed with precision in order to achieve such capability, and the QCL driver and supporting electronics play a particularly important role. 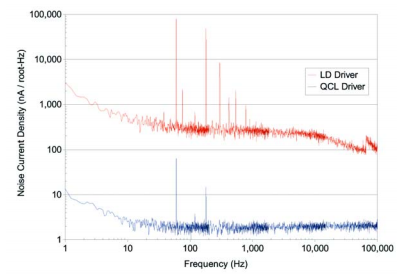 The figure on the left illustrates the noise spectrum of the QCL1000 over a 100 kHz bandwidth, at an output current of 500 mA, and compares it to a typical benchtop laser diode driver. A 10 Ω test load is used in order to operate the driver at a higher compliance voltage, a more stringent test of noise performance. Laser emission wavelength and linewidth are both partly a function of current density, and therefore drive current noise and jitter manifest directly as broadened linewidth and wavelength jitter. Broadening the center wavelength by a fraction of a cm-1 can reduce measurement sensitivity by an order of magnitude or more, so it is critical to approach the entire design process with an attitude towards eliminating noise.

During manufacturing, we test spectral noise density across a 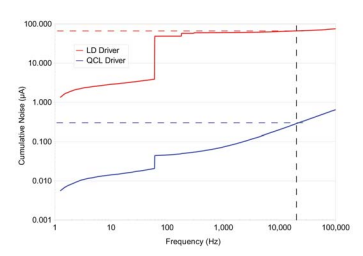 wide bandwidth using a load that effectively simulates a QCL. This test is more stringent than stating a single RMS noise value, and provides a more meaningful statement of noise performance. This attention to detail guarantees the driver meets or exceeds our own strict internal specifications.

APPLICATIONS
Due to their unique construction, QCLs operate with high power in the near-IR through terahertz ranges. These wavelengths are particularly suited to detection of molecules significant to humans. Applications for the lower noise QCL driver include: remote detection of explosive materials, medical diagnosis using the breath, non-invasive glucose testing, emissions monitoring of the atmosphere or marine environments, and pharmaceutical process quality control. Additional applications include anesthesia and hospital air quality monitoring, leak detection, and remote imaging.