What is a laser diode driver?

In the most ideal form, it is a constant current source, linear, noiseless, and accurate, that delivers exactly the current to the laser diode that it needs to operate for a particular application. The user chooses whether to keep laser diode or photodiode current constant and at what level. Then the control system drives current to the laser diode safely and at the appropriate level. The block diagram in Figure 1 shows a very basic laser diode driver (or sometimes known as a laser diode power supply). Each symbol is defined in the table below. Each section is described in detail below. Laser diode drivers vary widely in feature set and performance. This block diagram is a representative sample, meant to familiarize the users with terminology and basic elements, not an exhaustive evaluation of what is available on the market. 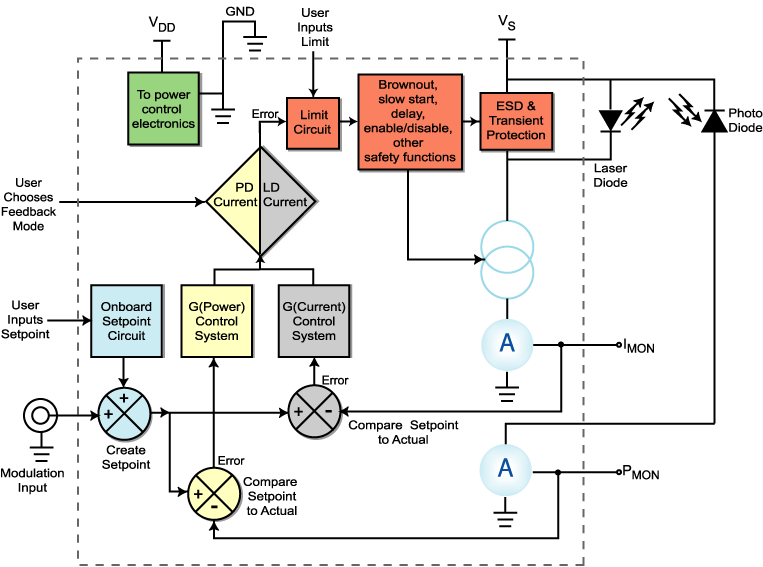 What is the difference between an instrument, a module, and a component?

Usually price, feature set, and size. An instrument typically has a front panel with knobs and button adjustments and some form of display to track how the laser diode is operating. These can all be automated with computer control via USB, RS-232, RS-485, or GPIB. An instrument is usually powered by AC, not a DC power supply. By our definition, a module doesn’t include the display or power supply, and has the minimum required adjustments. To monitor status, an external volt meter measures voltage and the module datasheet provides a transfer function to convert the voltage to actual laser diode current or photodiode current. A component is further stripped down, with no moving parts. External resistors or capacitors set operating parameters. Safety features are common to all three forms. Usually modules can sit on a benchtop or be integrated into a system using cables. Components mount directly to a printed circuit board (PCB) with plate-through or surface mount (SMT) pins. Two rows of pins are referred to as DIP packaging (dual-in-line), while a single row of pins is called SIP packaging (single-in-line).

A variety of off-the-shelf controllers are available in both instrument and OEM packages. Some vendors are blurring the boundaries, for example, offering USB control of components as mini-instruments.

Packaging of components and modules includes proper heatsinking of the circuit elements (or guidance on how the device should be heatsunk) and usually includes the appropriate cabling to the laser diode and power supply. Instruments include a power cord and user access inside the case is not necessary.

Threshold Current: A specification of the laser diode. At this current emission changes from spontaneous (LED like) to stimulated and coherent light is produced. This value is dependent on the style of laser diode and the temperature of the laser diode case. Telcordia offers four methods of finding the threshold current in SR-TSY-001369.

Constant Current Mode: Feedback controlling the current source is the actual current through the laser diode.

Constant Power Mode: Feedback controlling the current source is the actual current through the photodetector.

Modulation Bandwidth: This can be specified for a sine wave or square wave. It is typically the frequency at which an input signal is half the size of the original signal (3 dB point).

Depth of Modulation: This is specified in percentage. 100% depth of modulation means the maximum peak-to-peak signal allowed in the analog modulation input is repeated on the output current without distortion. Depth of modulation decreases as frequency increases.

Disable: When output current is disabled, all safety mechanisms are usually set to an initial power on state and only a residual leakage current is delivered to the laser diode.

Leakage Current: Ideally, when a laser diode driver is turned off, no current flows through the diode. In practice, power is not turned off, but the laser diode is disabled. The circuitry disables the Control System, not the Current Source. Small amounts of current can still flow through the diode. If ESD protection is in parallel with the diode, all residual current should bypass the diode when the current source is disabled. Laser diodes are typically not hot-swappable. Remove the laser diode only when all power is off to the system following proper ESD precautions.

ESD: Electro-static Discharge. The “zap” one feels crossing a carpet & touching a metal door knob is the most common example of ESD. Laser diodes are sensitive to ESD. A discharge that a human doesn’t feel is still enough to damage a laser diode. Proper ESD precautions should be followed whenever handling a laser diode or other ESD sensitive electronic equipment.

Ammeter: A meter that monitors current.

Internal Power Dissipation: With a linear current source, some of the power delivered by the power supply goes to the laser diode, and some is used in the laser diode driver. The Maximum Internal Power Dissipation of a driver is the limit past which thermal damage to internal electronic components is possible. Designing a laser diode system includes choosing the power supply voltage. If a 28 V supply is chosen to drive a diode whose forward voltage is 2 V, 26 V will be dropped across the laser diode driver. If the driver is running at 1 Amp, the internally dissipated power will be V * I or 26 * 1 = 26 Watts. If the internal power dissipation specification is 9 Watts, the Current Source components will overheat and fail. Wavelength provides online Safe Operating Area Calculators for all components and modules to simplify this design choice.

Compliance Voltage: The Current Source has an associated voltage drop across it. Compliance Voltage is the power supply voltage minus this internal voltage drop. It is the maximum voltage that can be delivered to the laser diode. It is typically specified at full current.

Load: For a laser diode driver, the load consists of the laser diode and / or the photodiode.

IMON: This is an analog voltage proportional to the laser diode current. Transfer functions are provided in individual driver datasheets.

PMON: This is an analog voltage proportional to the photodiode current. Transfer functions are provided in individual driver datasheets.

RPD: This is a common term used to refer to a resistor in series with the photodiode. Measure the voltage across this resistor to determine photodiode current. [Ohms Law: V = I * R].

VSET: This is a common term used to refer to the Analog Modulation Input signal. V indicates a voltage signal while SET indicates its purpose: control system setpoint. It can also be called MOD or MOD IN.

What are typical specifications and how do I interpret them for my application?

At present, each vendor conducts their own testing and there is no standard for measurement. Once you identify a solution for your application, it is critical to test the product in your application to verify operation. Here are some of the definitions Wavelength uses and how to interpret the specifications in your design.

Input Impedance: This is specified for analog voltage inputs such as VSET or MOD IN. At higher frequencies, the relative value of the impedance of the source and the impedance of the input pin matter. The voltage of the modulation signal may be reduced if the values are mismatched. The fraction of the signal reflected at the interface is given by:

(ZL – ZS)/(ZL + ZS) where ZL is the impedance of the input pin and ZS is the source impedance.

Noise: For a laser diode driver, the noise of the output current is usually given as a single number in microAmps. A more correct representation of noise is mA / √Hz, or current noise across a given bandwidth.

Bandwidth: This is specified for a sine wave. Where the peak-to-peak amplitude of the sine wave is half the magnitude of the signal input at the Analog Modulation Input (3 dB point).

Rise Time: After the initial delay and slow start sequence, if a square wave is applied at the Analog Modulation Input, the Current Source will respond to change this quickly. This can also be called ON time.

Fall Time: When the Current Source is disabled, the current level through the diode will fall to residual levels within this time. This can also be called OFF time.

Operating Temperature Range: Electronics are designed to operate properly across a designated temperature range. Outside of the minimum and maximum temperatures, damage can occur or behavior can change. The operating range that Wavelength specifies is coupled with the Maximum Internal Power Dissipation specification. Above a certain ambient temperature (usually 35°C or 50°C) maximum internal power dissipation derates to zero at the maximum operating temperature.

Operating Voltage Range: In some laser diode drivers, two input voltages can be used – one to power the control electronics (VDD) and one to provide higher compliance voltage to the laser diode (VS). Typically, the control electronics operate on lower voltages: 3.3 to 5.5 V. Exceeding this voltage can damage elements in the Control or Power sections. The Current Source (or Output Stage) is designed for higher voltages (such as 30 V with the PLD family of laser diode drivers). This specification needs to be considered in conjunction with the drive current and power delivered to the load to make sure the design does not exceed the Maximum Internal Power Dissipation specification. For example, the PLD5000 is specified to operate up to 5 Amps at 30 V input. Its maximum internal power dissipation is 15 Watts. If 28 V is used to power a laser diode which drops 2 V, 26 V will drop across the PLD5000. At 26 V, the maximum current within the safe operating range is less than 15 / 26 or 0.576 Amps. Driving more than that current will overheat the Output Stage components and potentially irreversibly damage the driver.

Monitor vs. Actual accuracy: IMON and PMON signals are analog voltages proportional to laser diode current and photodiode current, respectively. The accuracy of the actual currents relative to the measured values is specified in the individual driver datasheets. Wavelength uses calibrated, NIST traceable hardware to ensure this accuracy specification.

Grounding with modules and components:

Some laser diode packages short either pin of the laser diode to the case, which may connect the pin to earth ground through system hardware. Special attention to the details of grounding will ensure safe operation. The following definitions and options assume the power supply ground is floating or isolated from earth ground: 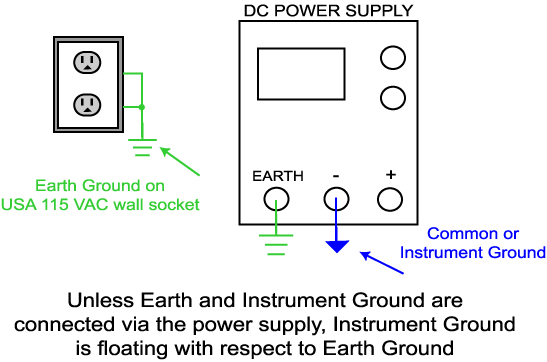 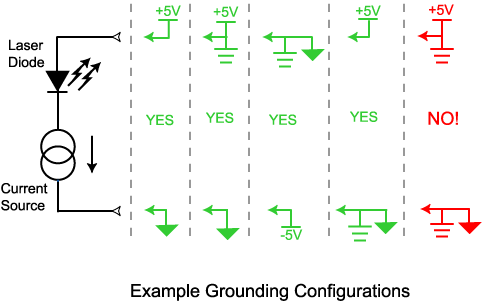 What is a Laser Diode?

External links are provided for reference purposes. Wavelength Electronics is not responsible for content of external sites.